By Elizabeth Helm February 06, 2016
Each time, I glared at the tiny screw (or nail) on the floor in annoyance.  My 10-month-old daughter is adept enough at ingesting every inedible thing she finds, without the additional temptation of sharp, shiny objects.  Even the endoscopy-trained physicians at our hospital would be little match for her covert reconnaissance missions.

As I picked up each offending piece of metal, I pondered where to put it.  The garbage?  No. Only "burnable" (plastic, paper) items could be taken to the incinerator. The compost? Obviously not. The ground? Burying it would be too much work. After exhausting this mental checklist, I had thrown a nail and two tiny screws into a little dish atop my dresser.

Last week, the gardener needed a nail. I thought about how I had almost buried it as I gave it to him. Oops. Today, I was trying to cover an unpainted patch on the wall (in true avant-garde fashion, the layer of paint had been applied over a taped telephone cord in the middle of the room) with a hand-me-down painting, and found the nail was too low. In cement walls, such a nail can't be moved without professional equipment and quite a bit more brawn than even my 60lb capacity (40lbs of toddler + 20 lbs of infant) biceps could muster.

I went to my neighbor's house in search of string. She had saved some from a package recently received and happily handed it over to me (CLUTCH -- we seriously have the best neighbors). I snatched the previously intrusive screws, rigged up a mid-painting suspension system (fancy points), snuck into the room where Esther was napping, and covered the eyesore patch. Victory.

And then I thought: life is so different here. I grew up in a culture of excess, where entire business operations (marketing, advertising, retail) boom by convincing people to buy both necessary and unnecessary items. We threw away at least one bag of trash per day. Here, I take my half-full, tiny garbage can up to be burned once each week. If something annoyed me in the U.S. (a half-broken, loose screw for instance), I would throw it away. I went shopping multiple times per week in stores large enough (in combination) to feed and cloth all the world's hungry and poor. Nearly every day, I saw ads for things I didn't need or even really want and thought: I should buy that [thing].

There are really no ads here, except for a few cell phone carrier logos and whatever shows up on my Kindle. I didn't realize the absent influence of entire armies of people trained to convince us to spend money until a Starbucks ad for a macchiato flashed across one of our tablets. My first thought was, "I want that drink." My second thought was, "That drink costs more than what a laborer here makes in an entire day. I should never want that drink again. Furthermore, this electronic device (one of many that we own) costs more than people here make in an entire year." Cue the execution of my self-righteous assumptions about myself and the world.

Until I moved here, people who lived on less than $2 per day were just a statistic -- all 2.8 billion of them. They were easy to forget, because I had no idea who they were. Now, they are our neighbors. I cannot forget them, because they are the reason I eat every day (in the US, it is far easier to forget the people who grow or raise our food, since we rarely see them).  More importantly, they are the reason Scripture gives us challenging words such as these:

"If a brother or sister is poorly clothed and lacking in daily food, and one of you says to them,'Go in peace, be warmed and filled,' without giving them the things needed for the body, what good is that?" (James 2:15-16, ESV).

The picture I hung up with those renegade screws highlights people James might have been describing. They are the people that we see each day (the people in our neighborhood, indeed). They are people I would love for everyone I love to see each day, as well, at least in their minds. Would I make different choices with my time, money, and affection, if I truly considered these people?  Would you? Could you?

I am so imperfect in the ways that I use the blessings God has given me. But by His grace, I can become wiser and more Christ-like in every way. And so can you, dear friend. So can you. We all have a few loose screws laying around, and every single one can be used with purpose. 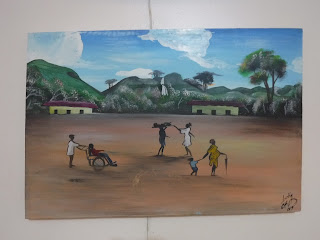 Popular posts from this blog

On Losing My Virtual Footprint and Physical Ticket

By EthanHelm January 15, 2022
Thirty years ago, the technology that just turned my digital world upside down was unimaginable. I was locked out of my Google account because I foolishly left a Google voice number as a two-factor authentication. So when I was logged out of all devices unexpectedly, I couldn’t receive text messages to prove my identity.  The thought of trying to describe this situation to someone in the 90’s is comical. What is Google? Two-factor authentication? A digital world? Similarly, I can’t imagine explaining that despite having a ticket, I couldn’t board a plane that had a seat for me because a computer wouldn’t print my youngest child's boarding pass. In pursuing security and efficiency, have we lost common sense?  Technology has changed the world so quickly that I am old enough to remember a time when manual workarounds were commonplace and young enough to expect a lot more change will come in my lifetime. I spent much of yesterday trying every possible means of recovering ten years of e
Post a Comment
Read more

Making a List and Checking it Twice (Choose Joy)

By Elizabeth Helm December 17, 2020
Some of the best advice I heard about moving is to focus on what is good about where you are. This is solid counsel, and applicable to both temporal and geographic contentment. The pandemic provides endless opportunities for discontent, particularly comparison to how things used to be. But perspective is powerful.   I could think about snow, which reminds me that Summer is by far my least favorite season (especially in pregnancy), we don’t have a yard/lawn/parks, and the kids have been stuck inside for months (and now can’t go three minutes without fighting). We can’t bake Christmas cookies because we made the difficult but correct decision not to have an oven in our 90 degree kitchen. Our kids miss soccer, gym class, running, and having friends. And if my thoughts go in that direction, my jaw tenses up and frustration mounts.  Or I could think about how we have everything we need and so many things we want. A huge fan blowing. Christmas music streaming on internet better than we oft
1 comment
Read more